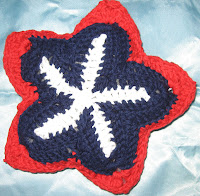 Completed the Red White and Blue (July 4) Star accent pillow and the Starfish accent pillow.  Anyone who loves the sea will want one of these.  It is 8 inches, tiny, but a memory catcher.  Both are crocheted (both sides).  I have a much smaller Red White and Blue matching sachet.  Lovely, Lovely rain we've been having.  Don't know if it's enough to fill up the drinking water we don't have in West Palm Beach, but we are in our stormy season now for real.  We just have to remember not to plan afternoons out.  Blessings, Janet 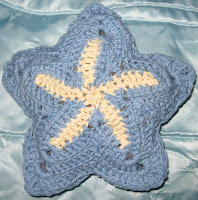 Monday, June 6 Jeanine and I went to a place where the wolf is in Grandma's bed in Grandma's house. Little Red Riding Hood is no where to be found.  The grounds are beautiful, they grow their own herbs, and the butterflies are abundant.  The 5-course luncheon was delicious.  We had Tomato Herb Spread, Parmesan Herb Bread, Creamy Broccoli w/Smoked Gouda soup; Spinach Flan w/Carmalized Vidalia Onions; Sesame Green Beans and for dessert Strawberry and Chocolate Custard Tart.  The Mocha coffee was a terrific after luncheon drink.  To drink with the luncheon we had Lavender Lemonade.   Judy, Jeanine's friend came with us.

We met a gal who had brought her pet crow with her. He was adorable, I had no idea crows could be so friendly.
Blessings, Janet 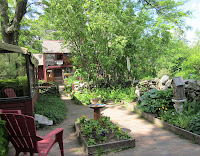 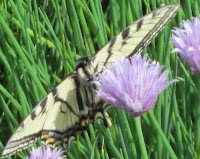 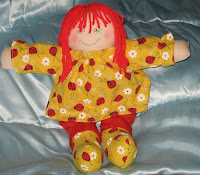 I've been busy with 2 new Babies.  I decided to dress them in Lady Bird fabric. They are excited to be going to show and tell tomorrow.  New babies always want to be adopted.   I hope your creations are coming along and you will share.  Blessings, Janet 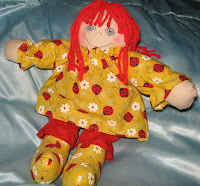 Happy Father's Day all the Dads 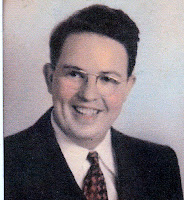 Happy Father's Day to all the Dad's - they are so special.  My daddy will be 95 July 31.  Par-Tay.
I love the memories of the past (Mom worked some Sunday's and that was our day to see a movie and go to Steak & Shake for lunch).  We lived in the Town Steak & Shake was first born - Normal, IL. My hometown.  Daddy loved science fiction movies, therefore, I know all about aliens and brain implants, well, it was that time and those days and it was cherished memories.
Today daddy still likes Steak and Shake (milkshakes) but Belgian Waffles are on the menu too.
Daddy was born in Clinton, IL.  Richard Clinton Warrick.
Blessings, Janet
Posted by JKW at 12:36 AM 1 comment: 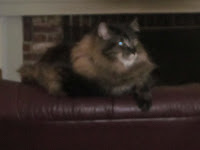 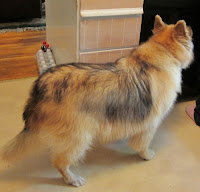 Tornadoes in MA - yep, I was an hour late getting into the airport in Manchester because the plane had to go around the bad weather.  They tore up Springfield, MA pretty good.  If the other plane had not gotten into Baltimore late, I would not have arrived at all that night.  As it was, Patti and hoofed it to the next gate for our next plane and watched it taxi into the area just as we arrived.  They turn around these planes quickly and we were on our way.  That night it was unbelievably hot (they had a heat wave of only 3 days out of the 14 I was there).  The windows were open (no a/c) and by early morning the cool was so cool coming in that a single sheet was not enough cover.  Whew, that was refreshing and beautiful.  My two new best friends Mario, the Cat (this one took awhile to friend) - He has a cute pink nose and his favorite spot is on the chair back; and Bear, the pups - she has 'bear ears' - yes really, Beautiful pups, the best doggie, I was her friend and she mine immediately w/o hesitation.  Can you tell she's waiting for food to drop ;)  The mountains are beautiful, no, they are Awesome, gadz. We were up into the mountains when I took the picture, so it's a bit hard to tell. I was in love with the place the minute we took a ride (well, actually, the minute I felt the cool air the night before :)  Hot FL does not get cool ever, until Nov. or Dec. Blessings, Janet 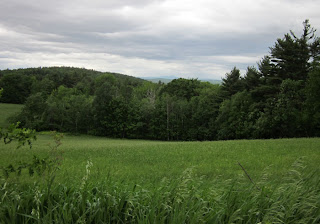 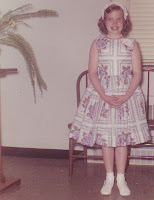 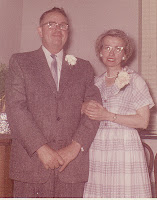 Today I would have been married 51 years. Yes, I was a child bride.  The First Baptist Church downtown Bloomington, Il is where I was married.  Mom and daddy sure look young.  My Sister, Bonnie, was very young. The best man is driving the car Monte Quinn.  Sharon Phelan was the maid of honor.  Everyone is still alive, except hubby, Mel; his parents and my mom.  Mel passed July 2001.  Blessings, Janet 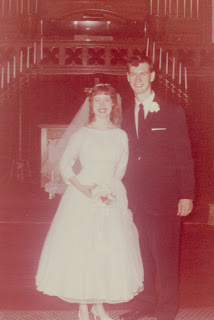 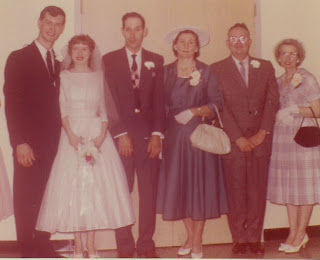 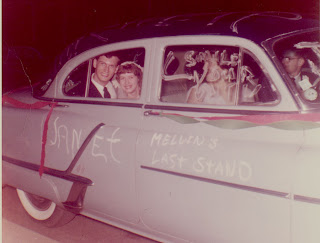 Yellow Cottage by the water

I have been cooling off in a most beautiful state.  Always looking for my yellow cottage by the water. I did find a not so yellow cottage, but it was Not by the water - can't flood the area beside it either to make my own lake, well, I love the area and the little cottage is wonderful.   Then I found another cottage.  This one is yellow and it is by the Sea.  A bit large for me but doable.  What do you think?
Blessings,
Janet